As brief background, the Intel logo has been a powerful mark of an ingredient brand since it’s introduction in 1969. The “dropped-e” logo became ubiquitous. From an identity standpoint, it was transformed from a more static version to one in the familiar oval used today.

Based on the corporate logo, they developed a 26-character Latin alphabet to be used in communications. However, from an application standpoint, most particularly on emerging mobile devices, the font was very hard to control as a core brand graphic. Further, it had limitations in global usage. So Intel very intentionally decided to address the issue head on. They felt that the brand should have a distinctive and consistent look in all languages. This is all the more important as reading is significantly shifting to mobile devices.

To give this some perspective, by the end of 2014, Cisco projects that the number of mobile-connected devices will exceed the number of people on earth. In addition, by 2018, they forecast at least 1.4 mobile devices per capita globally. And as smartphone technology and connection speeds accelerate, there really is no looking back. Example; the average smartphone will generate 2.7GB of traffic per month in 2018, a 5-fold increase from today. If you imagine that, for the most part, everyone will read digitally, then the challenge becomes how to “own” a distinctive look… one closely aligned with a brand’s core identity. 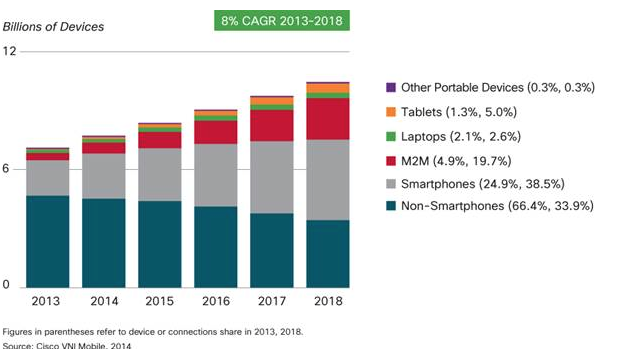 Technologists understand where it is all headed. Today, smart brand marketers are also embracing the impact on how their key audiences receive messages. If they want to maintain the integrity of the positive equity in their corporate brands, they must understand the medium, and adjust accordingly.

Yes, we are in the beginning of a transformation no one could have imagined twenty years ago. Intel is facing it head-on.